One of the beautiful things about Wanamakers is that it is still a brick and mortar store awash in local history… the names of the families that owned it for more than a century are familiar; Hoppes, Reinhart and Bond. New families have taken over, Hungaski and Hendricks are less familiar names- but ones that hope to honor its history.

The Hoppes/Reinhart family that owned the store for the first 100 years of its existence is represented today by Cheryl Donat and her cousin Bryon Dailey both of Massachusettes. Cheryl and Bryon are the last two grandchildren of Claude and Helen Reinhart; the hard working couple who many locals still remember behind the counters of the store up until the late 70s.

I had the pleasure of interviewing Cheryl just last week on one of her semi annual trips to our area to visit her aunt and uncle who still live in Allentown. I asked her to share her personal memories of her grandparents and the store. The time frame that is most vivid to her is the late 50s when she was around 8 years old- this makes sense to me, as I watched my own children grow up in the store and entertained many a niece and nephew those tender childhood years are ones where penny candy and “playing store” seem to be a universal delight- not to mention the magical WK & S train that puffs up behind the store on Sundays.

Cheryl recalls the fun of being allowed to refill the penny candy case (of course some fell into her mouth) and the pride she took in being given a basket to fill with canned goods from the basement which she would carry up, mark in the price with a grease pencil and give to her grandparents to shelve. She also remembered the “Coke man” bringing glass bottles of soda in sturdy wooden boxes to refill the coca cola cooler located at the very heart of the store- if you care to pull back the floor mat in front of the coffee station today you can see the large black stain on the floor where that same cooler chronically leaked! She spoke of the sweet smell of chewing tobacco which lined the steps leading up to the second floor (where you can find empty boxes to pack your groceries today). These sights and smells and tasks; delivery men, tobacco and individually marked groceries can all be experienced at the store today- it turns out that running a little country general store doesn’t fundamentally change all that much over a century and a quarter!

Some of you may have noticed our amazing 1976 calendar hanging above the history case in the store, and more calendars from the 60s and 70s have recently been discovered and added to our collection. It turns out Claude knew his customers well and would have THREE types of calendars made every year- a “pretty girl”, a religious scene, and one that featured a farm landscape. We now boast one of each to hang for our diverse customer base to enjoy today. As a matter of fact if you take a moment next time you visit you will notice old photographs and white 8” x 11” laminated biographies of former owners placed all over the store.

It seems Claude Reinhart was not only a veteran of WWI, a patriot, and a store owner but he was also a deep thinker who could almost envision the future- maybe it was the sociable hours he spent around the coal stove with other locals discussing world events, or his work, with Helen, with the Civil Air Patrol keeping an eye on the skies during and after WWII- but Claude predicted the moon landing long before it was a reality.

Owning the store from 1929 until his death in 1978 (after which it was carried on by loyal employees including his niece, Jean Bailey, until it was sold to the Bonds in 1979) was not always easy on Claude, Helen or their kids, Ella Mae, Grant, and Nancy. Claude and Helen would try to set store hours, but inevitably a customer would knock on the door after closing time and one of the Reinharts would relent and let them in. One of the few firm hours were Sunday afternoons. The Reinharts would close at 1:00 and Claude and Helen would go for a drive, sometimes even taking a lucky little granddaughter along. Helen would inevitably fall asleep, and Cheryl recalled with a smile her grandfather’s mischievous method for jolting her grandmother awake- when they would reach a relatively safe stretch of road he would begin to jerk the wheel back and forth until his awakened wife and delighted granddaughter were roaring with laughter!

Grant returned from World War II in a state of shell shock, I believe we would call it PTSD today. He drove truck a little and worked in the store a little, but mostly was cared for by his parents and the community. The Bonds would let Grant sit quietly in the corner of the store during the last few years he was in the area after they bought it. Ella Mae (Cheryl is her daughter) and Nancy (Bryon is her son) both went to college and became a school teacher and a nurse respectively, as neither of them really wanted to take on the store after watching how consuming it was for their parents.

We are in possession of an entry from Claude Reinhart’s journal dated  June 14, 1960. In it he muses about how “old” the store is, how it needs improvement, whether he can afford to do what would need to be done, how to keep it aesthetically pleasing, but eventually concludes that he feels too old to take on the financial risk. As Cheryl and I were wrapping up she paused and said “My grandfather would be amazed at the store today! He would be thrilled it was still open, and so pleased that those improvements he’d dreamt about were made, but above all he’d be glad the community still has a place to gather, to discuss, to look towards the future.” 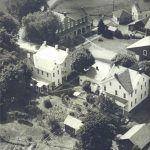 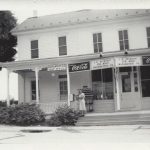 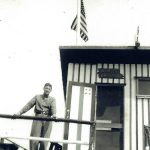 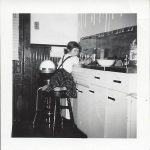 Cheryl Donat washing dishes in the old store kitchen which still looks like that today! 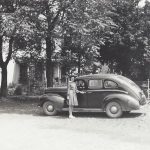 Ella Mae in the back parking lot of Wanamakers 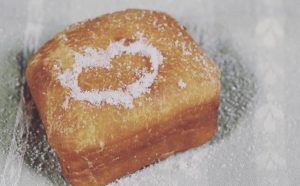